Ahhhh road trips. Can’t help but love them! Especially when they’re with some really cool people!

My previous post was about me reminiscing on some memories. Well, this is another one of those memories! Be sure to go read that one first before you start this one! (My 21st Birthday!)

Alright, let’s get to it! I have a feeling this will be quite a long post. So grab a snack, a drink and get comfy! P.S. I’ll be sure to add lots of pictures so you don’t get tired of reading. Besides, we all love visuals when we’re reading anyways!

Let me take you back to 2014! Woahhh that was 2 years ago and it feels like an eternity has gone by. I swear each passing year seems to go by quicker and quicker! Where has the time gone? Slooooow down life! Let me catch my breath, phew!

The year 2014 was both a difficult yet extremely exciting year. There were a lot of personal and health issues that were present throughout the year but the summer of 2014 was a year to remember. I feel like it was a reward for it all as I got to plan and undertake a road trip. I mean, people take vacations and road trips all the time and some more frequently than others. My family was one of those that didn’t get the opportunity to do so often. So this was extremely exciting for me!

My family and I were going on a road trip with my cousins. After lots of begging and pleading, our parents had finally said yes! Every night during the month of July my cousin and I planned for this upcoming road trip that was going to be through the course of 9 days. We spent nights looking for hotels and creating our itinerary for our trip. As the nights went by, we were becoming more and more excited!

Remembering those nights planning with my cousins brings back bitter sweet memories as it was just as fun planning it as it was road tripping.

Our creeper van was booked (the only vehicle that fit 11 of us), as was our hotels, and itinerary full and ready to go! Can I just say, that I was not expecting to take so many things with us on our road trip?! The amount of things that we lugged with us was a tad bit crazy; now times that by two families and you got a boat load of things. We were packed to the brim in our van but still excited to get the show on the road!

Let me give you a little bit of a breakdown of the itinerary. Ohio, Pennsylvania, Pittsburgh, New York and New Jersey were the destinations. Why these destinations, you say? They just happen to be super close to each other, so why not! I’ll explain each place as we continue reading. But first, we must cross the border to the US of A! With a smooth entrance across the border we said goodbye to Canada. I took a picture of the U.S Flag as we drove by!

The first destination on our road trip was to head to Sandusky, Ohio. It took us almost an entire day of driving to arrive. That evening we made our way to Target, which by the way, was so much cheaper than the Target here in Canada. Thank god we no longer have it! The main focus in Ohio was to hit up the Cedar Point Amusement park. Now, let me begin by telling you that everyone in my family, including I, LOVE amusement parks. We spent every summer at Wonderland when we were growing up so the thrill runs in our blood. This amusement park was like any other park; filled with lots of roller coasters, a water park and tons of games. On this day it was pouring rain which made us second guess whether we should go or not. Seeing as we were only in Ohio for a day, we decided we would hit up the amusement park anyway.

We spent the entire day at Cedar Point with the kids going our separate ways from the parents. We were very lucky that there were so few moments of intense downpour! Aside from that, we had a grand old time sitting on each rollercoaster. One of them being the fastest rollercoaster in America (maybe); Top Thrill Dragster! Not going to lie, but I was nervous to go on it, but there was no way I was going to miss out on this opportunity! It felt great to conquer the mighty beast! What’s so cool about Top Thrill Dragster is that the ride operates 120 mph and has pretty much a straight drop that makes you think you’re plummeting to your death; all complete within 7 seconds ish. Definitely worth the long wait and we met some cool dudes too! I regret not making more friends while there!

That night we were super tired from an all day trip at the amusement park. Nonetheless, we headed for a Walmart. Can I just say, why aren’t Canadian Walmart’s 24/7 with self checkout?! Hello CANADA! Step up your A game! Please and thank you. This was one of our many Walmart trips during our road trip adventure.

The next morning comes around and we’re all packed up in our van and driving to Pennsylvania. During our entire trip, there was a lot of bickering but just as many laughs to compensate for it!

Pennsylvania and Pittsburgh were each a one day trip as we drove through. They consisted of lots of shopping rather than touristing.

We are now 4 days into the road trip and with 5 more days left, we head to New York for two days.

Now here’s the fun part of the entire trip – NEW YORK! Seeing as I’ve always wanted to be in the Big Apple, I was quite ecstatic. During the two days we were there, we took the underground train from the New Jersey Airport right into NYC. We arrived right outside of MSG (Madison Square Garden) and the moment we set foot outside from the tunnel, we were bombarded by New Yorkers trying to sell their tours. It felt like I was in Bombay, India all over again! After quite some time trying to figure out which tour to take, we chose a bus tour that would take us to all the surrounding areas. It was a good way to see most of it as walking would have taken the entire day. Through the bus tour, we were able to get an overall look as to where most of the places were that we wanted to visit. There is A LOT to see in NYC but with the time limit, we chose just a few.


Day 1 of NYC consisted of the following:

Bus tour – This wasn’t the greatest bus tour to choose as it took forever and a day for our turn, rude employees, and just not the best way to experience the city. Nonetheless, we were able to see a lot of the place during a short period of time.

Rockefeller Centre – One of my favourite places to see in NYC! You’ll see why. 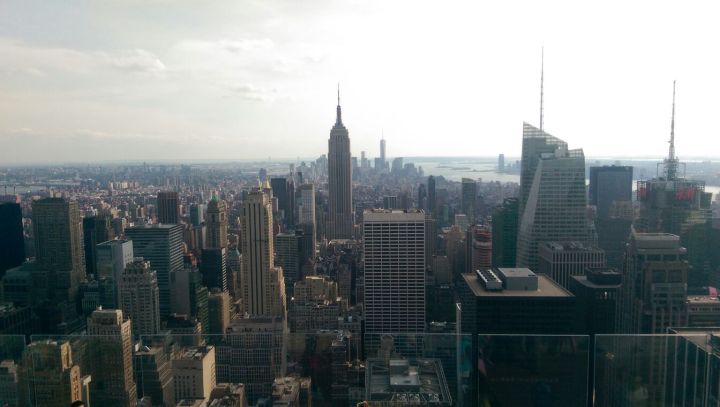 Central Park Zoo – It was a decent zoo! We saw lots of animals as well as a show! This particular day was boiling hot so besides getting a tan, we were super tired. Central Park is beautiful but we unfortunately were too tired that day to stroll through it.

Boat Tour – With the day being as hot as it was, I was ready to nap the moment the boat left the dock. It was just so peaceful…but there was so much to see! This was my second favourite thing to do as a tourist. We took the 7pm sunset boat tour right until the sun went down.

New York is so LIVE during the night so after our lovely boat tour we walked through the hustle bustle of people in Time’s Square to the M&M store. Although we didn’t purchase anything in there, it was quite an experience!

That concludes our NYC trip! I don’t think I’ve ever walked so much in my life as I did while we were in the city. Nonetheless, it was by far the best place we went to on our trip.

2 more days left of our road trip and we end it by spending it in New Jersey. We had a very relaxing 2 days of shopping.

Now it’s time to head home. Quite frankly, I’m home sick and missing my bed. As we pack our bags and our van, I think to myself how thankful I am to be so close to my family and what a wonderful trip it has been.

I miss Canada. I miss home. A 9 hour drive until I get to see my love; my bed.

This was a trip down memory lane but God knows how long until my next post.